Below is the loose route of my 2014 tour.  Original estimates for trip length were 4600 miles, but the final tally ended up being around 5500 miles.  I think I tacked on a good chunk of extra miles touring around Illinois and Wisconsin to visit friends.  Most of the route was on paper maps and the dangerous but sometimes useful google maps bike routes.  Be warned, it may send you off into a lake, random fields, sandy trails, muddy roads, etc.  Check out the ACA bike maps if your going to be on their established routes.  They were quite handy when I reached the Northern Tier. 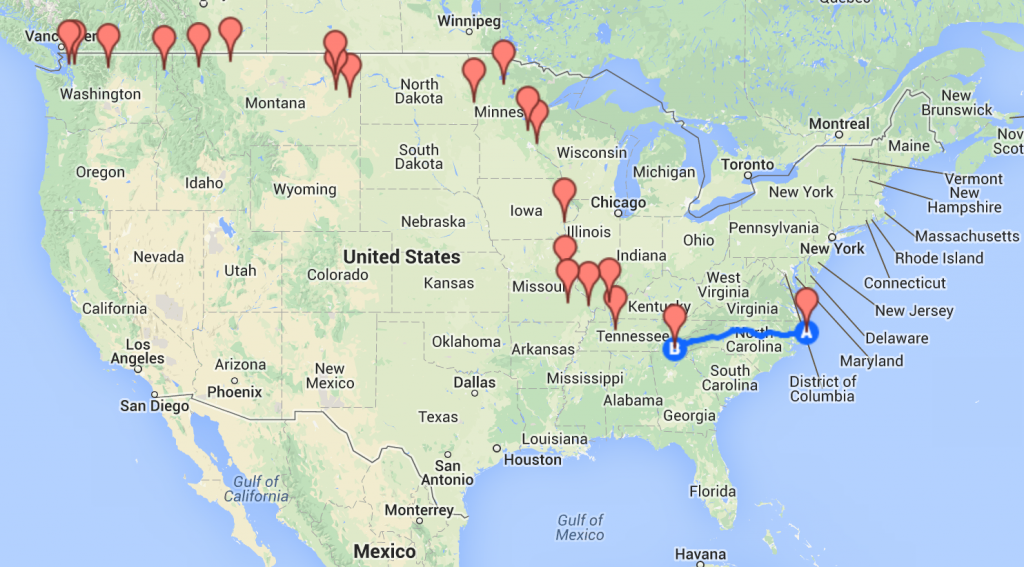 My trip began Tuesday, April 29th where I flew into Norfolk, Virginia.  After sorting out some issues with my malfunctioning hand pump, flat tires, and a sleepover in the airport lobby I was off towards Virginia beach and the south towards Kitty Hawk North Carolina.  Then it was west for a few thousandish miles, meandering my way north and then west again.  I got some help with routes through North Carolina from online searches and the helpful Dept. of Transportation in Tennessee suggested some good options.

Once in western Tennessee, I connectedd with a touring route established by the Adventure Cycle Association.  You can find a map of their routes here.  I rode north along the Great Rivers route (detouring into IL, WI and MN to visit family and friends) and eventually connected with the Northern Tier route in Stillwater, Minnesota.  From there I rode up to Bemidji, MN to spend a few day with my grandparents, aunt and uncles, and other friends. From there it’s smooth sailing west through the windy planes and sun scorching shadeless big sky country, Montana.  I crossed the Rockies through Glacier National park, followed by short but beautiful ride through Idaho.  Then, following almost all of the Northern tier across Washington, but detouring at the end to go to Bellingham, WA where my sister was living at the time.