This is Jeff (aka Dad). As you probably know, I’ve been traveling with Brad for the last couple weeks as he worked his way across the plains of North Dakota and Montana. I thought it would be nice to spend some time with him during this hot, dry, lonely stretch of the trip. Brad asked if I’d like to add a guest post to the blog so I’ll try to shed a little side commentary on our travels.

From day 1 of Brad’s planning he’d left an open invitation to join him on his trip. I loved the idea of it but the act of actually joining him by bicycle was not really in the cards for me. I would have slowed him down immensely and I’m not sure I am physically capable of some of those climbs! But, give me a motorcycle or a car and I could certainly keep up 😉

I’d driven the western route last year by motorcycle and knew generally what he’d be in for and felt the plains would be a good place to accompany Brad. Driving through the plains is beautiful and interesting in its own right, but it is long and hot and I didn’t want to do it twice in one trip if I could avoid it. As it happened, our good friends Eric and Colleen were moving to New Zealand and had packed most of their belongings into a moving van which they stored at Colleens parents home in western MT. However, they had a convertible that lacked a driver and we thus hatched a plan that I would take the car out west on tour with Brad and deliver it to Colleens folks. They live just 1/2 hr off the Amtrak Empire line which in turn runs within an hour of home.

And so, Brad and I planned to connect in Bismark ND and I was to tag along with him as far west as I could go before heading back in early August. I headed west the evening of July 22nd and went as far as my brother Steve’s in Chaska MN. In the morning I headed for a rondevous with Brad in Bismark.

Now, some words about the car… It is a 1976 MG Midget convertible. For those of you who don’t know what a Midget is think ‘clown car’ and you’ll get the idea. The Midget is a british car – it is very small and is a bit of a challenge to get in and out of. However it is a very fun car to drive and people seem to gravitate towards it as it is so unique. This Midget has a four speed manual transmission and thus is not built for speed. It seems to run best at about 45mph. Which for this backroad tour is actually perfect since I was not in any particular hurry.

Before the trip, Eric had cautioned me that at higher speeds ‘she uses a little oil’… Well, the first few days of my trip in catching up with Brad in Bismark proved that out. At 55mph I had gone through about 7 qts of oil and I was seriously wondering how this was going to end. I cleaned several store shelves of all the 20W50 they had and kept an ample supply in the trunk. Thankfully, once I caught up with Brad, the pace slowed dramatically and the MG responded favorably and pretty much stopped chugging oil. Throughout the remainder of the trip the MG ran like a champ!

As noted by Brad, we had a nice stay with my aunt Nancy in Bismark followed with a good visit with my cousin Terri in Dickenson. Terri commented that it was a good thing we’d tracked south of Brad’s original route which took him further north as the oil boom has made travel through that area difficult. The roads are extremely busy and the options for camping or lodging are very constrained. Even on our more southernly route we observed quite a bit of oil activity and traffic.

As we moved west, Brad was generally on a 60-90 mile/day pace and depending on the wind this translated into 6-8 hours of riding with a few rest/water breaks, a longer lunch or afternoon siesta, and then an evening ride into the destination town. My days generally consisted of getting up with Brad in the morning and we’d have breakfast and break camp. If there was a good coffee shop in town we’d stop there for a bit otherwise Brad would get rolling. At my slower pace I’d generally drive 3 hrs to cover his span – typically connecting with him for a late lunch and then going ahead to scout out evening camp optons. The extra time gave me opportunity to shop for groceries, charge up all the electronics, and get a little reading in. I knocked out an old classic 1984 which I’ve heard many references to but never actually read. Big Brother indeed – kinda freaky how on target some of that material is!

Some of you will know that I am a home brewer. I had noted Brad’s brewery reviews had suffered a bit lately so we attempted to rectify that 🙂 We visiting several small breweries in Havre, Wibaux and Whitefish. All three of these were excellent and I had a very nice visit with Michael – the owner of the Havre Triple Dog Brewery. Brad will have more opportunities in this area when he gets to Washington as micro-breweries are plentiful in the area. 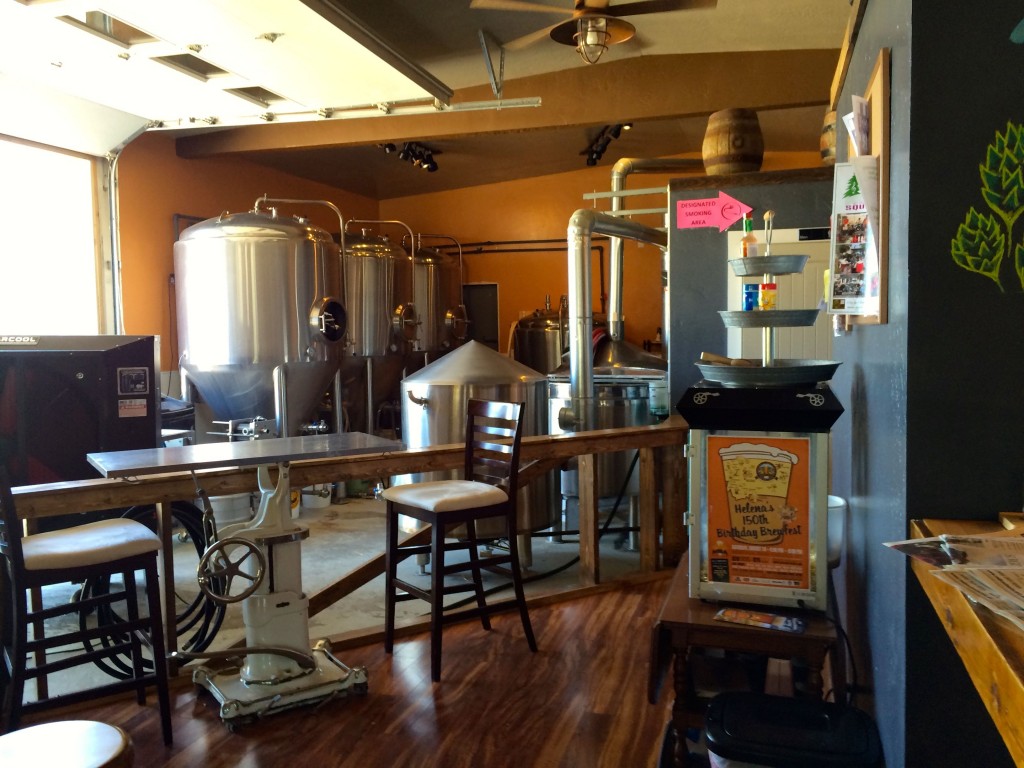 Brad’s biggest challenges in the plains were the sun, wind, and heat… Individually any of these can be a burden but combined they wear you down in a hurry. It’s easy to look at a mountain and think – wow those will be really hard to get over… but the plains are sneaky and may in fact prove to be one of the harder parts of his trip. Watching Brad come in at the end of each day – dry and spent – I wondered how he’d hold up and how the mountains would go. But frankly, he made Logan pass look easy… the cooler weather and having Jarle as a riding partner really picked him up. He actually beat me to the afternoon campground that day!

So, here some more photo’s of touring in the MG and of the guy who is normally behind the camera in this blog. 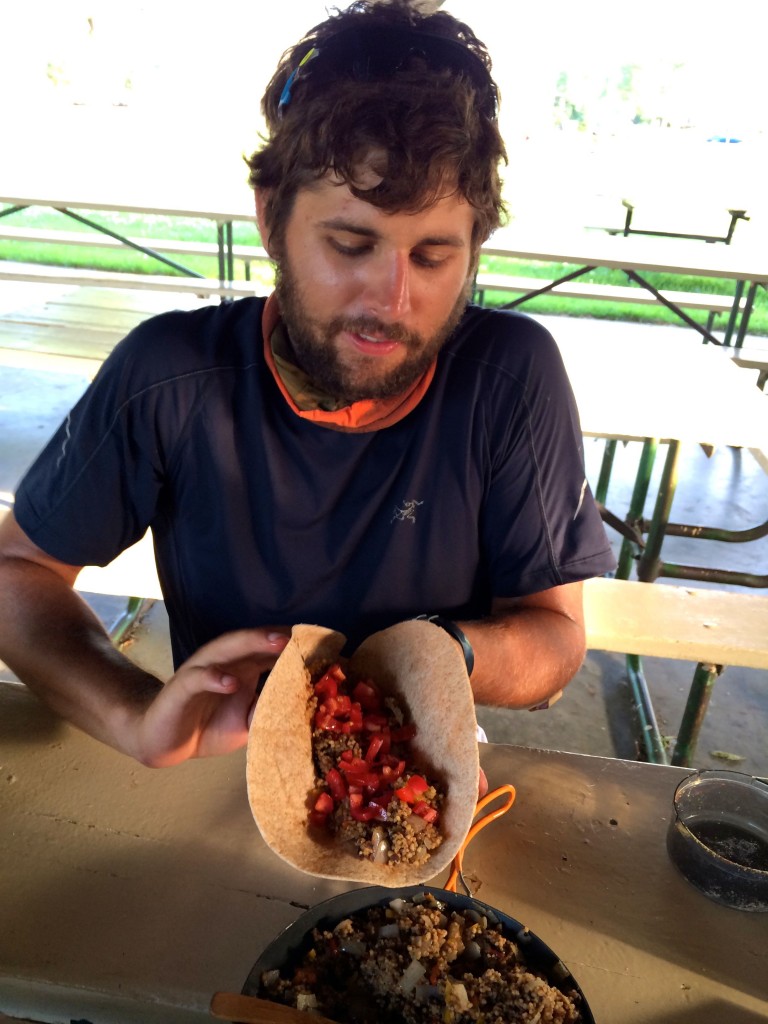 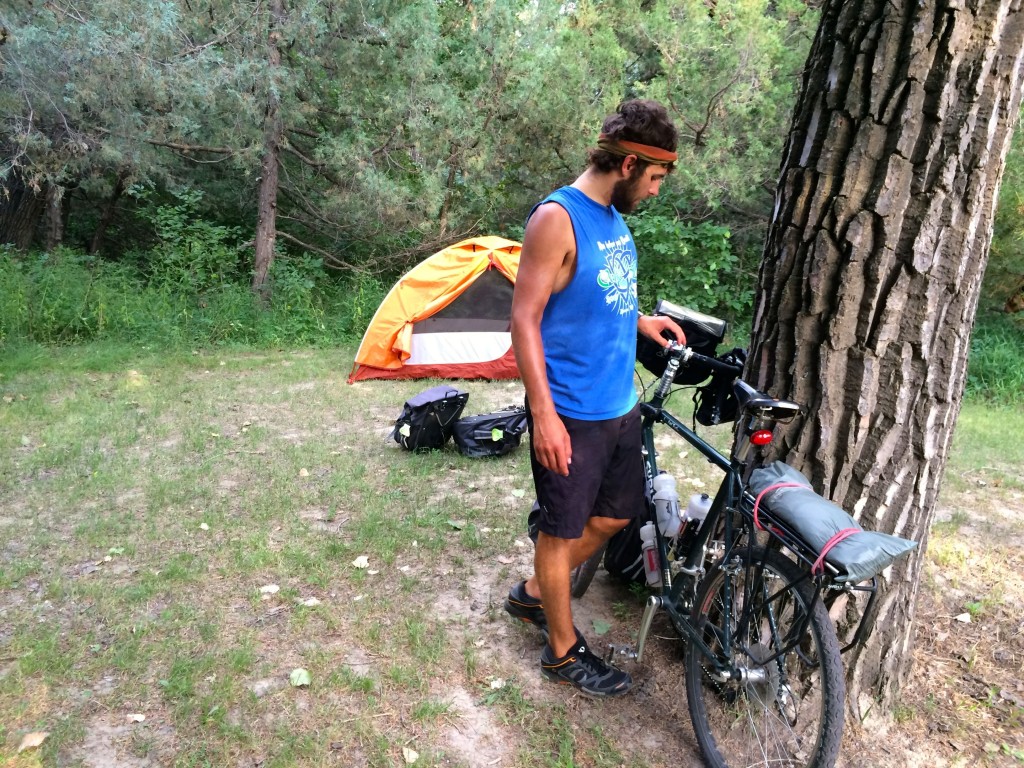 On a related note: I had breakfast with a ND oil man who said he was lured there by the promise there was a pretty girl behind every tree! When he finally found a tree he asked “Where’s the girl” to which came the reply “Apple Tree”. 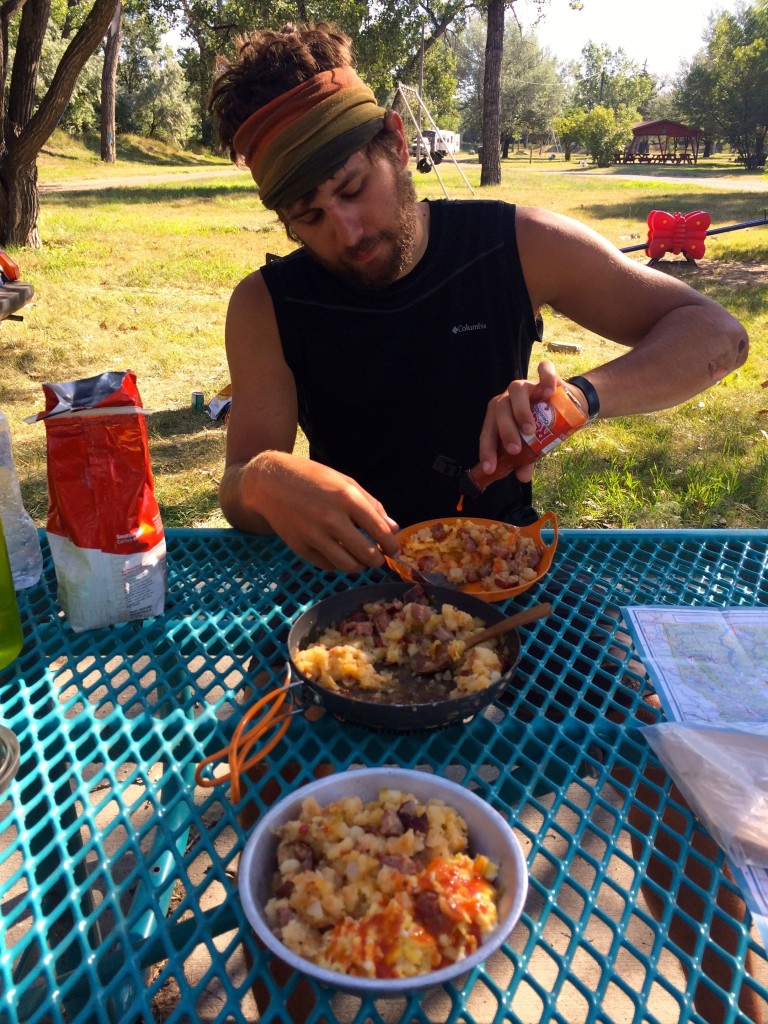 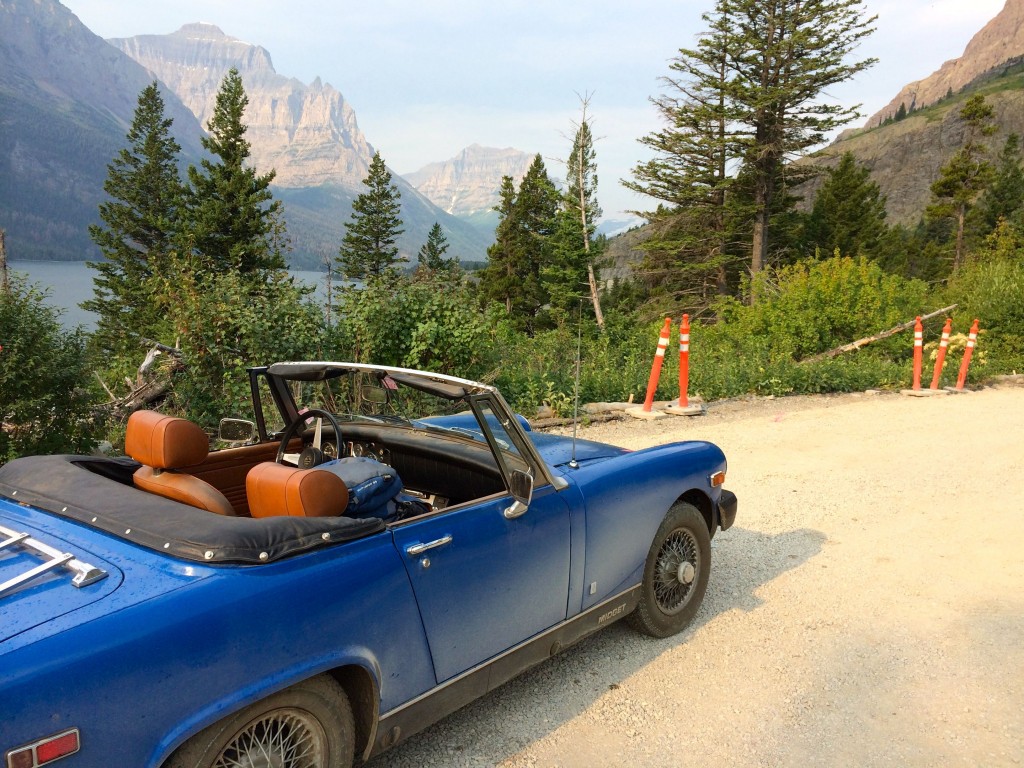 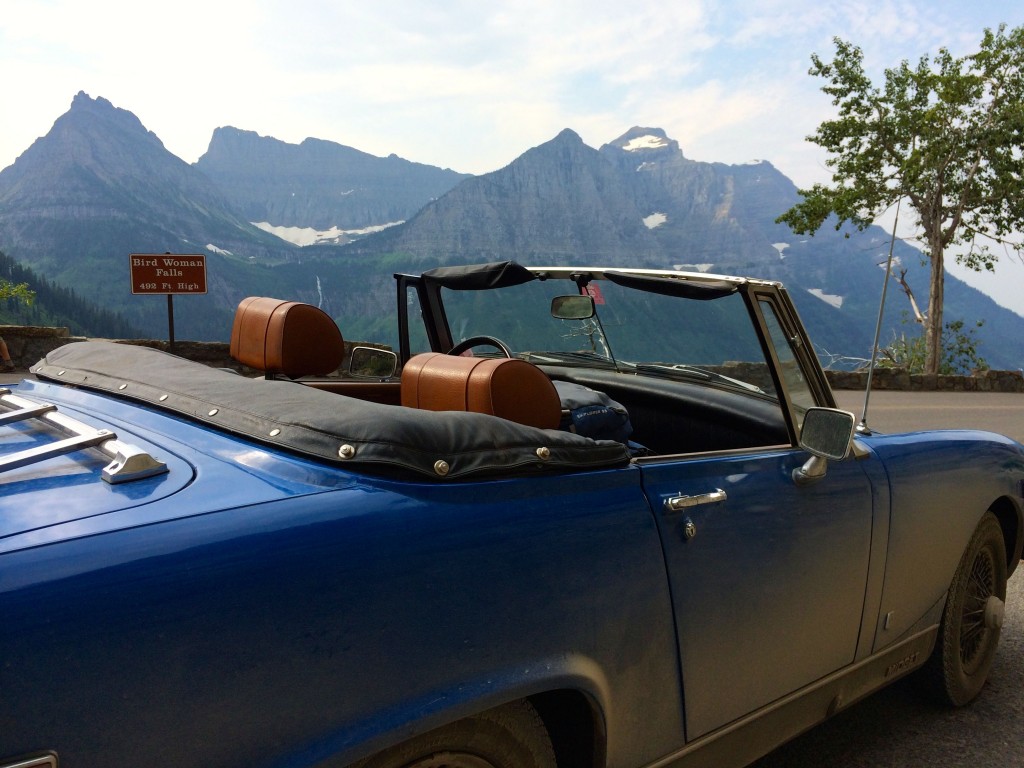 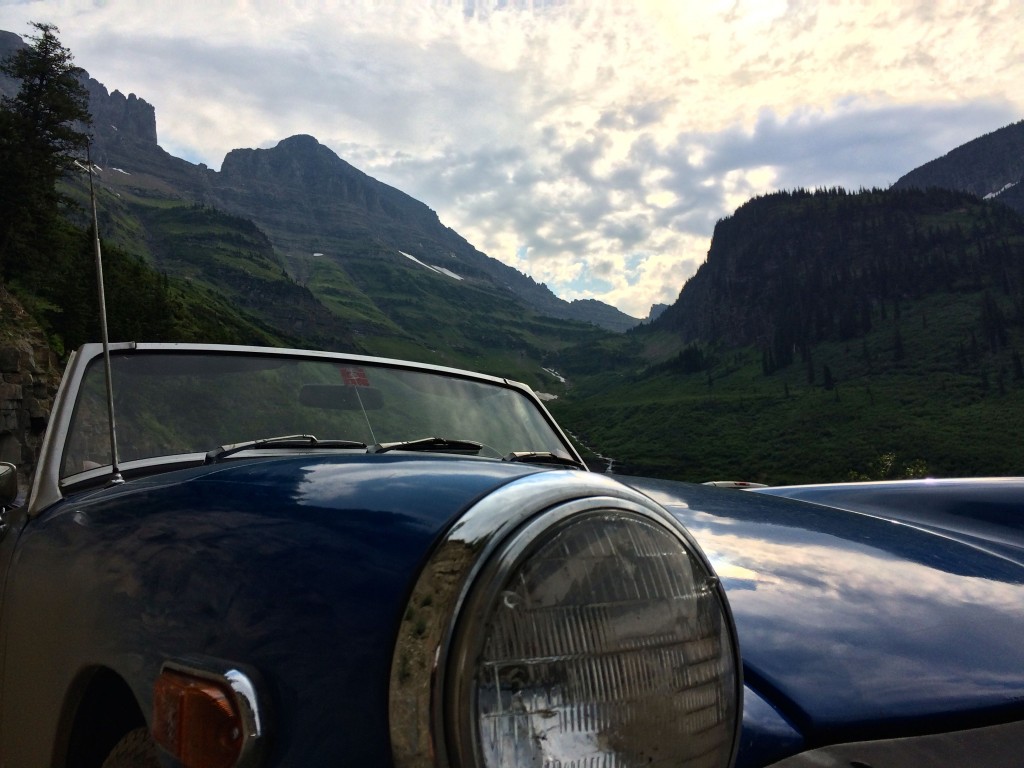 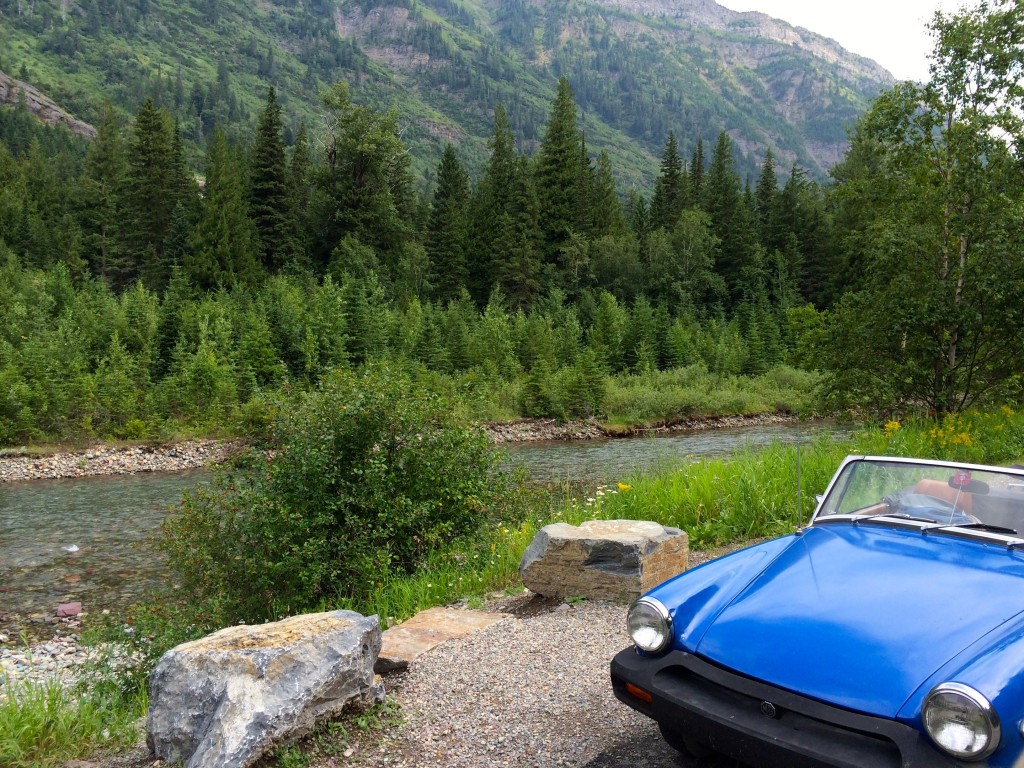 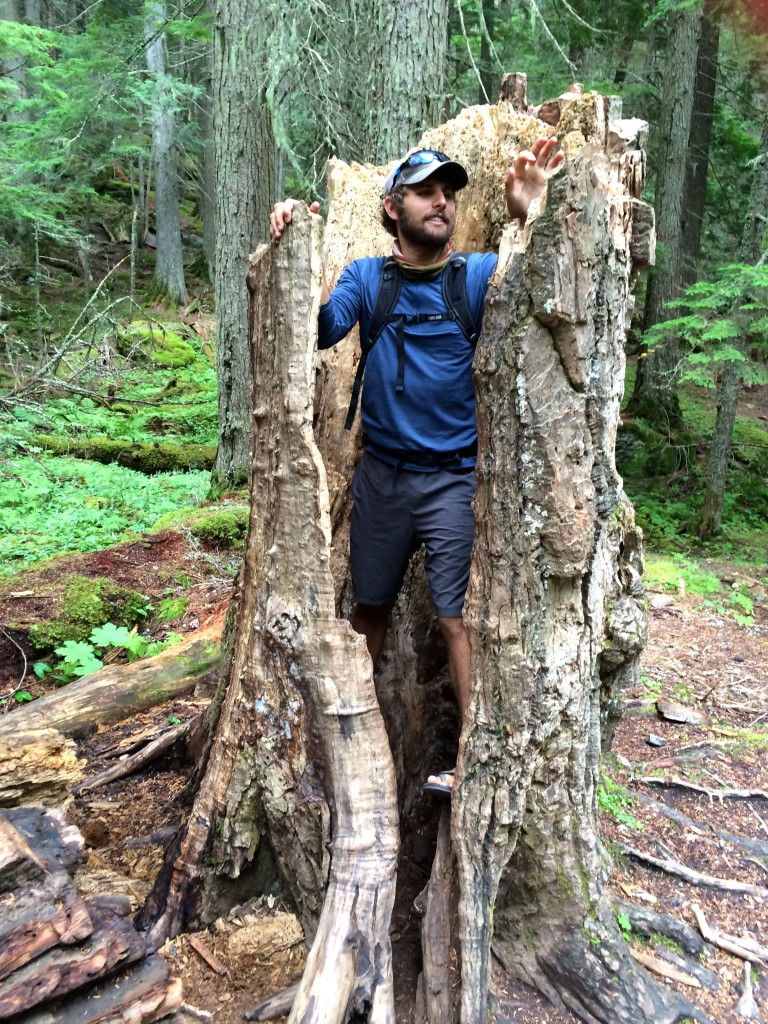 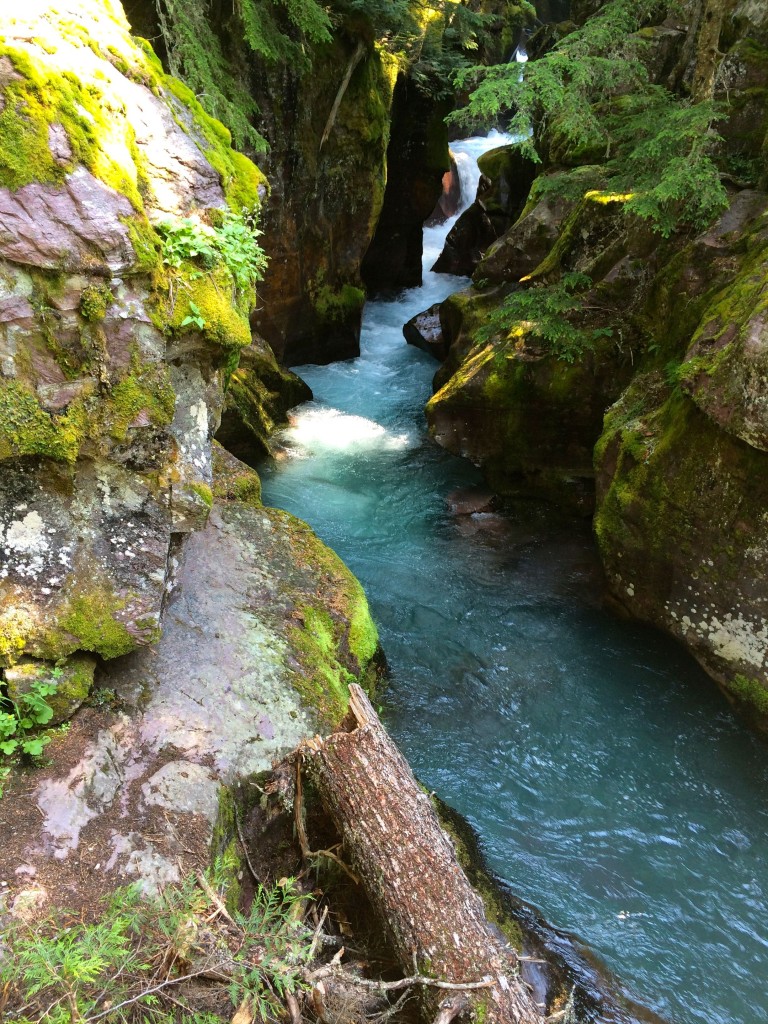 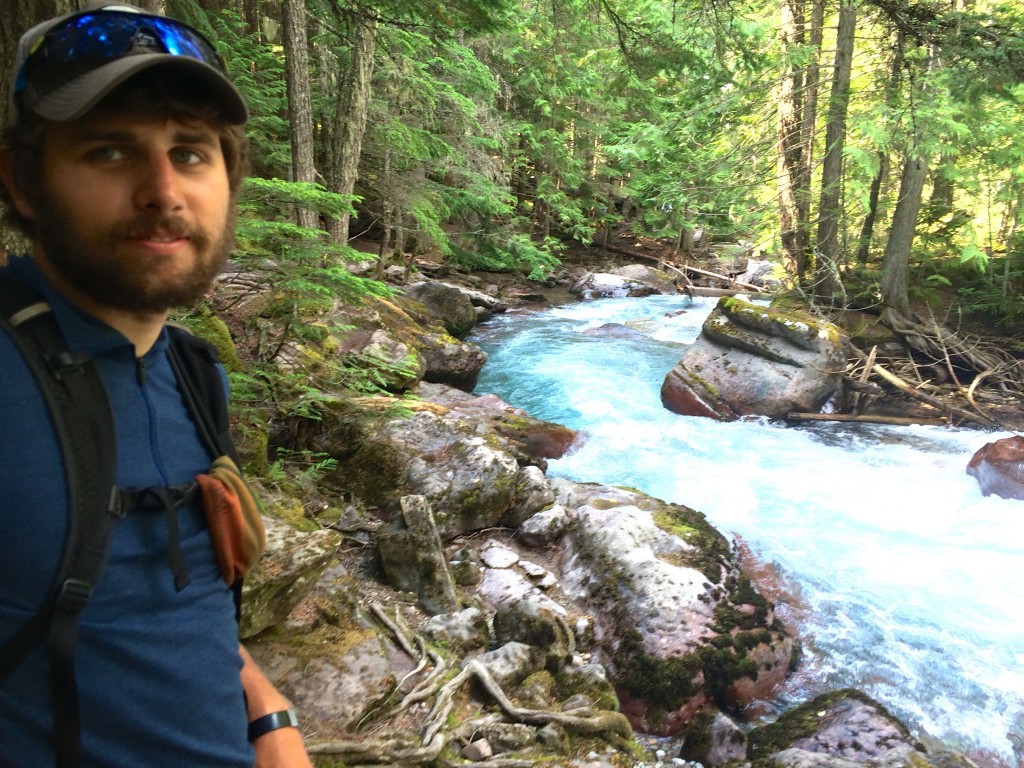 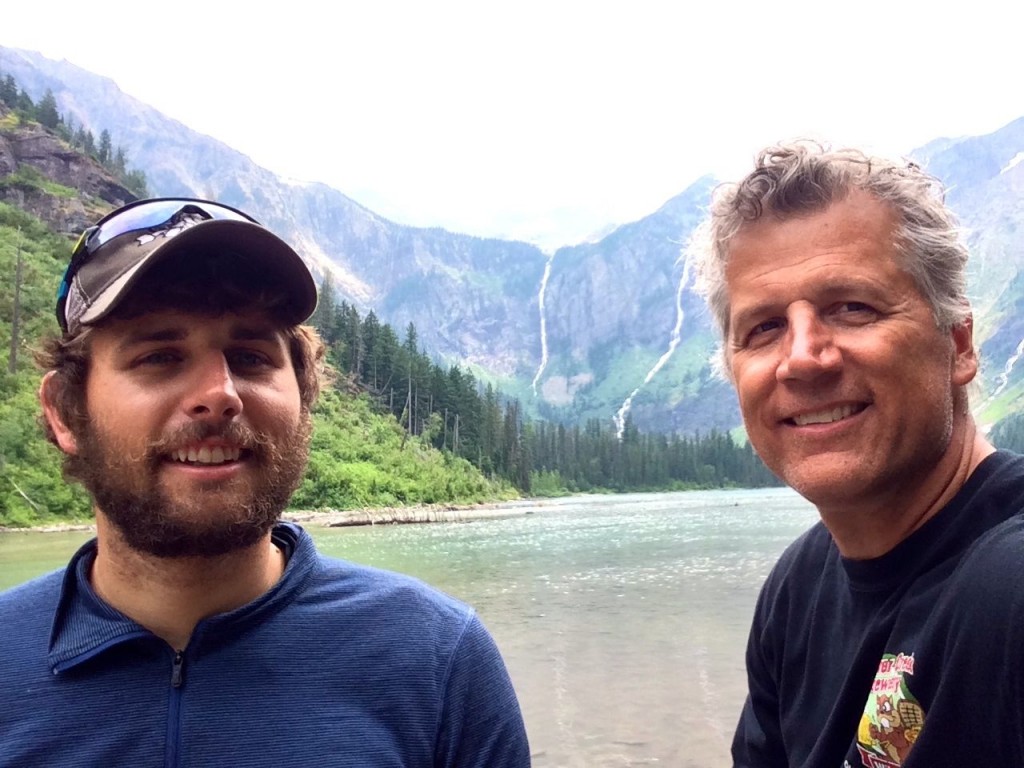 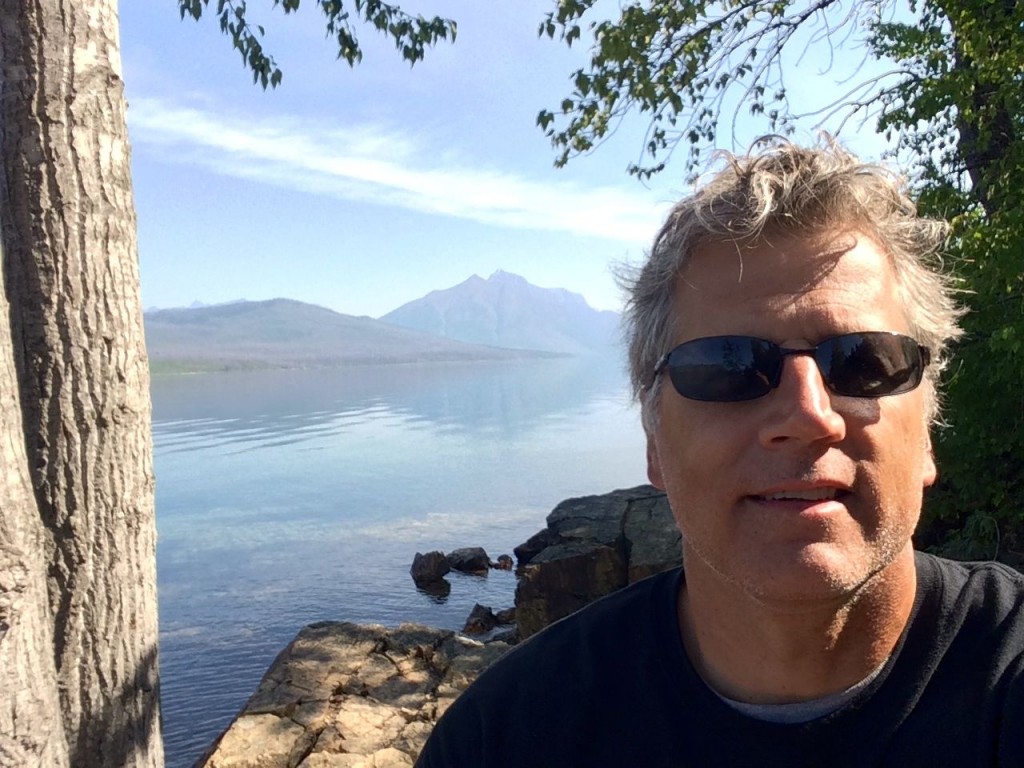 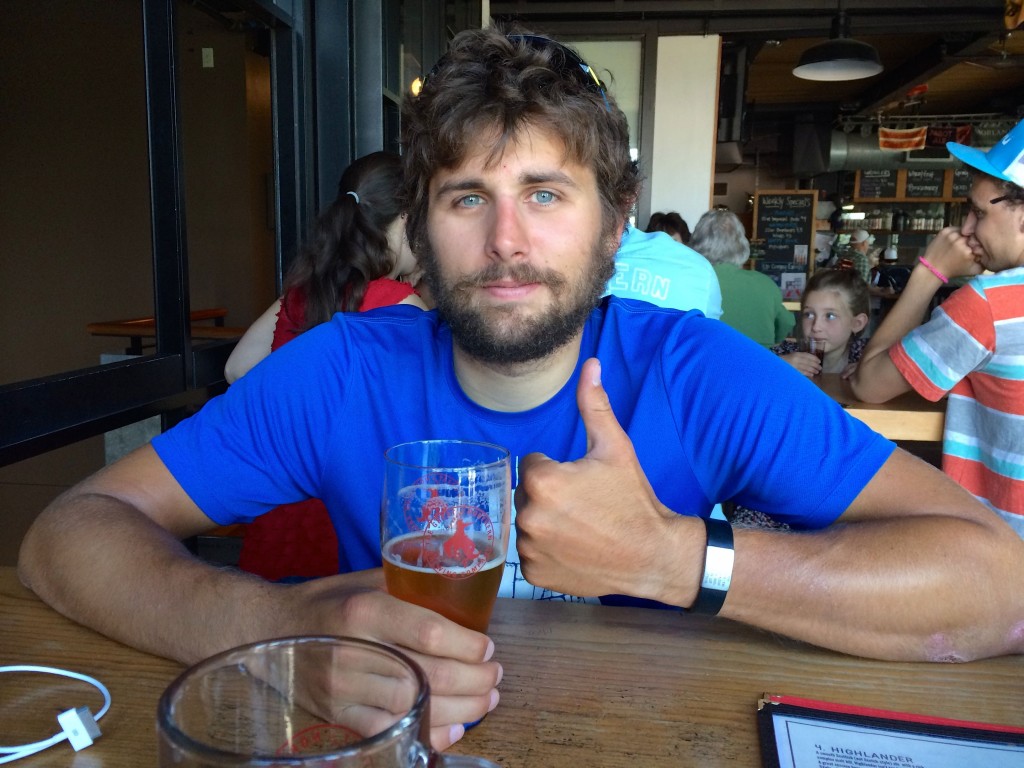 It was a bummer turning back in Whitefish… but I had a deadline to return home and he has one to get out west. He’s in for a little more dry hot weather between the ranges but he’ll finish with an awesome route through the north cascades – more climbing but I’m sure he’s up for the challenge.

I dropped off the car and spent the night with Keith and Mary Jean – they were such gracious hosts! They dropped me off at the station in Shelby for the long ride home. The train ride home has been long but it’s nice not to have to do the driving. I’ll be home in a few hours now and already I see I’m over a 1,000 miles away from Brad. Safe travels the rest of the way Brad. Happy peddling!